There is an urgent need to upgrade these jobs because Malaysians look down upon these workers, many of whom are in the frontlines during any crisis as shown recently

The capitalistic authorities call the lowly-paid menial work as 3D jobs - Dangerous, Dirty and Difficult. In developed countries, they were classified as such to make employers pay higher wages but sadly, this is the opposite in Malaysia. This sector is now being shunned because many of us fear the social stigma that is associated with these workers or jobs.

Once again these jobs have come into the spotlight, a debate which tends to resurface each time a new Human Resources Minister takes over the labour portfolio. Recently, Dato Seri M. Saravanan, in conceding that the unemployment rate has reached an all-time high because of the COVID-19 pandemic, asked Malaysians to just grab any job that is available, especially the 3D jobs.

He said Malaysians must change their mind set and accept any job that they can get in order to put food on the table, adding that it was better to work in the sectors that offered 3D jobs than to be unemployed.

There have been lots of arguments as to why these 3D jobs are generally shunned by locals although two reasons stand out clearly. No rocket science here, actually. First, most of us are guilty of treating them like dirt. The importance of garbage collectors, street sweepers and construction site workers was underlined during this COVID-19 pandemic by their presence in the frontlines. But did anyone really take notice of this during the Movement Control Order (MCO)? Some may have but most were too busy with other things.

You know how much we pay these unsung heroes who keep our environment clean at the expense of their pride and health? A mere RM1,200 a month, which is the le­­gislated minimum wage from this year. Two years ago, it was a beggarly RM900. If this is not tantamount to being inhumane, I don’t know what else this is.

If one looks at the quantum of the contract prices offered to cleaning and garbage collection companies by the local authorities, it won’t be surprising to find that the bulk of the payment is profited by the companies.

I am sure many of you have seen the contractors driving luxury cars while these poor workers are seen clinging on to the dumpsters with an unbearable stench while being driven through the streets.

According to the Global Salary Calculator website, garbage collectors in Singapore are paid nearly S$2,800 (RM8,400). For someone living in JB and travelling daily to work in Singapore, this is not only an above average income, but a high one. Even if he chooses to live in that city, it is a fairly decent sum if you compare it dollar-to-dollar.

And did the contractors or employers of these workers offer them a hardship allowance like the government and the rubber glove manufacturers gave their workers during the COVID-19 MCO period? No! Did the authorities even try and push their employers to pay them extra? Of course not, after all “they are just some 3D sector employees.” For the employers, it was all about profits and living a luxurious lifestyle. They don’t seem to care that the workers who keep their companies profitable struggle in slums.

Look at how the employers treat them in the first place. Unlike other developed nations, they are not even given a proper attire that could protect them from the dirt and viruses that they could collect while on these tough and dirty jobs. Before COVID-19, they were not even given masks when doing their daily rounds.

Just look at how the garbage collectors hang on to the moving dumpster vehicle with no proper place to stand or hold, exposing themselves to extreme danger, with little regard for their safety. This has been going on for decades and none of the authorities responsible for them have hauled up the contractors despite such open violation of work safety and health requirement. 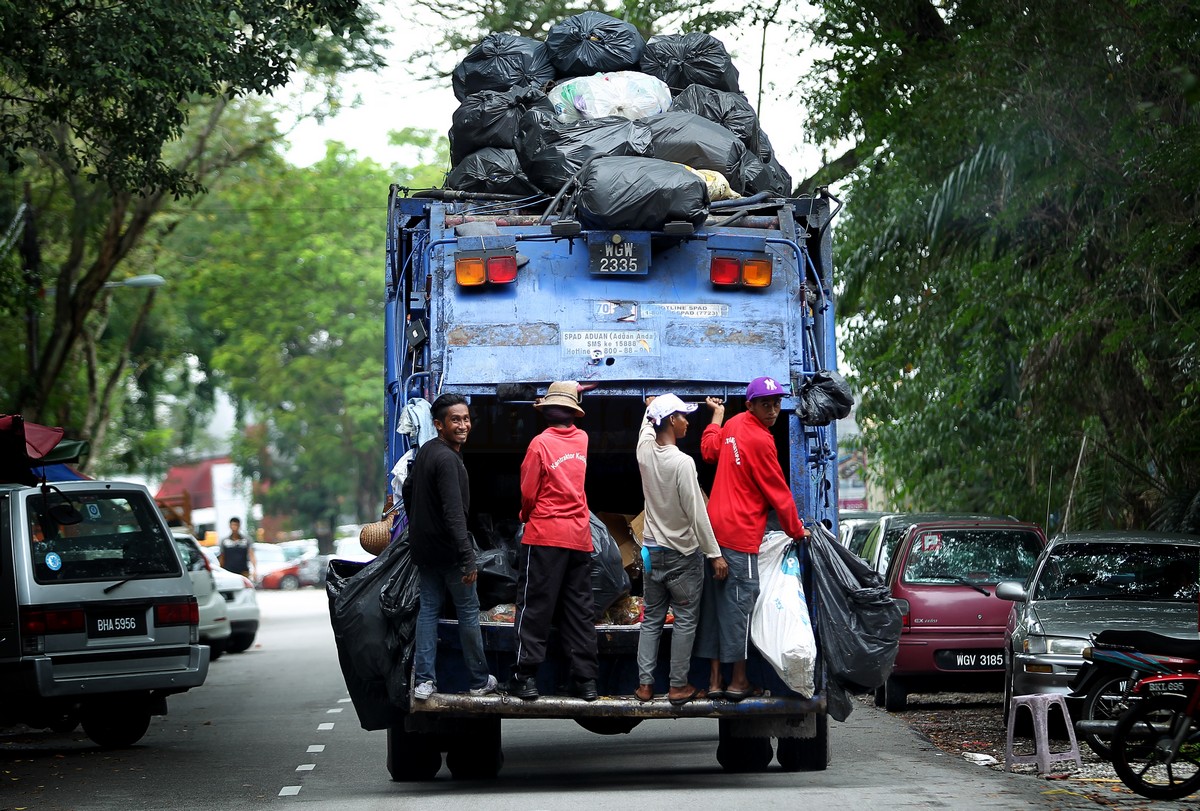 Do we ignore them so much just because most of them are migrant workers? Despite their important role in our daily living, most of us just do not show any respect probably because of our penchant for class and status in society. We just love the capitalistic way of life where we tend to show so much love for power, position and money. Rubbing shoulders with the rich and powerful seems to be the priority.

There are parents who tell their young children to call these workers uncle but add adjectives like “garbage uncle, sweeper uncle or the bread man.” In many cases, parents even tell their children to study hard or end up sweeping drains and roads or become a garbage collector. Look how we unconsciously plant unpleasant descriptions in the minds of the young about fellow human beings.

Why is this so? Simple, our idea of success seems to be how much we earn or what kind of expensive lives we lead. Or that’s how we have been brought up not only by parents but also the system of governance in place. Obviously, workers in the 3D sector are not given any form of respect whatsoever. In short, we treat them in a most undignified way. Once there is no dignity shown in certain jobs, most of us will shun them.

Then we come to the wages. This really stinks as Malaysian workers in these sectors are mostly paid the miserly minimum wages with no allowances. In most developed countries, the 3D sector workers are paid three to six times more than what these workers get here. Wages there normally commensurate with the safety and health risks that go with the jobs. In some countries, salaries even match that of those earned by graduates.

In Malaysia generally, respect and dignity of a human is wrongly linked to his earning capacity, the position that he holds or the car he drives. So as long as a worker is paid RM1,200 month, he is deemed to be in the lowest strata of society. These workers develop very low self-esteem, sinking even lower as the world races past them.

Because of these totally unacceptable minimum wage policies, employers have become addicted to migrant workers who come very cheap. Which means, these workers are exploited by state-sanctioned policies and poor enforcement of labour and employment regulations.

The Malaysian Employers Federation (MEF) executive director Datuk Shamsuddin Bardan said a few years ago that Malaysians typically avoid working in sectors like agriculture or any industry that involves manual labour because society does not view them as highly-respected career choices.

“Malaysians shun 3D jobs not because of low wages. The 3D jobs are looked down socially and people doubt the 3D jobs are given any recognition,” he had said. While he may be right in a way, he is wrong to say low wages are not a deterrent. Try raising the minimum wage to a liveable one like RM2,500 a month in the 3D sector, and you will get many Malaysians taking up the jobs.

And of course, treat them with respect by making sure they are provided proper professional attires which take care of their security and safety. Bring dignity back to their jobs they do and boost their self-esteem with decent wages.

Instead of calling it 3D, add the word “Dignified” and make it 4D. Stop treating them like pieces of dirt. Give back their dignity and humanity so that they will work with passion and commitment, with much pride.

The best way I can think of is for Malaysia to start planting the seeds of dignity for these workers by raising their minimum wages to RM2,000 a month, providing them with proper work attire, periodic health checks and proper job security.

Until and unless this is done, we will continue exploiting these category of workers so that we can keep calling it the 3D sector to continue paying them peanuts. In the meantime, I would advise Saravanan to start looking at the root causes on why this sector is not attracting Malaysians.